What’s In a Danish Name?

When I was a kid, my dad would entertain me with stories of his childhood in Racine, Wisconsin. The town has one of the largest Danish-American populations in the U.S., and he would tell me about Mrs. Jensen, his first grade teacher; Dr. Rasmussen, the family physician; Rev. Larsen, pastor of the Lutheran church he attended with his family; and Mayor Olsen, who held office from 1973 to 1987.

“Do you notice a pattern, Mia?” he would ask, and I would laugh at all those names ending in SEN, just as our name—Christensen—did. But my dad’s collection of Danish surnames didn’t end in Racine. After college he moved to Chicago where, within six weeks of his arrival, he met and (and later married) my mom, Kirsten Hansen, whose great-grandmother was a founder of The Danish Home.

So, when I tell you how much my Danish heritage means to me, you know why. 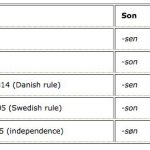 Danish surnames were patronymics, based on the father’s name, and changed from generation to generation.

My older son, Jake, brought all of those SENS to mind again when he came home from school last week with a family history assignment. At first, he was a little disappointed that our background doesn’t include a more exotic mix of foreign relations. The family of my husband, John Hagen, hails from Norway, which strikes Jake as just more of the Scandinavian same. But when I suggested he investigate the history behind Denmark’s ubiquitous SEN surnames, he decided to take a look. 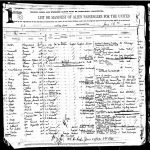 Ship manifests listed “alien passengers” to the United States, as Danes and several other European immigrants came to the new world.

Soon he was sharing his discoveries. The SEN and SON surnames that are so common in Scandinavian countries started out as patronymics, meaning they were based on the father’s name and changed from generation to generation. “Under those rules, I would be Jacob Johnsen, and my son’s last name would be Jacobsen, like Farfar,” Jake explained, referring to our elderly friend at The Danish Home. He turned to his little sister. “But you, Astrid, would be called Johnsdatter, because you’re a girl.”

Such a system quickly got confusing in a country where only 20 to 25 Christian names were in common use and where it was impossible to accurately discern familial connections by surname. In 1826, the Danish government abolished patronymics in favor of fixed family surnames, but many families continued using the father’s name as his children’s surname. It wasn’t until 1856 that Danish law “froze” family names, but the practice didn’t become entrenched until 1900. Four years later, another law was passed requiring Danes to use family surnames and establishing guidelines for choosing them.

Jake and I had fun perusing a list of the 50 most common Danish surnames and the number of Danes who share them. There was my mom’s maiden name, Hansen, in third place with 216, 000 Danish namesakes. My family name, Christensen, came in sixth, with 119,100 namesakes, and Farfar’s Jacobsen, shared by 24,400 Danes, was in 23rd place. The most common name in Denmark, Jensen, is shared by 258,203 Danes, including my dad’s first grade teacher and the famous Danish silversmith, Georg Jensen, pictured at the top of this post.

Inspired by his newfound knowledge, Jake suggested we pay a visit to The Danish Home to tell Farfar how he ranks in the Danish surname sweepstakes. As always, Farfar responded with good humor and shared some of his family history, including the fact that his surname dates back to his great-grandfather, Jacob Sorensen.

While we were there, we noted that many residents of The Danish Home also bear the SEN and SON names of their hereditary homeland. Indeed, being a native-born Dane or of Danish extraction was once (but is no longer) a requirement for residents, who had to prove their Danish lineage back through at least three generations. Not surprisingly, Scandinavian first names also are well-represented at The Danish Home.

One of the fun facts Jake discovered during his research was that Denmark also regulates first names. Parents are allowed to choose from 7,000 approved names—and you won’t find Sailor, Chicago or Briar Rose anywhere on the list.

On the way home, Jake asked if his first name is Danish. I told him it is common in Denmark, Norway and the U.S., as his father and I intended.

“It was a difficult decision,” I told him. “The other choices were Rasmus, Jesper and Ole. Would you have preferred one of those?”

A glance in the rearview mirror confirmed that John and I had made the right decision in naming our Danish-Norwegian-American son.

Share this post
Subscribe to The Hope Chest
Looking for Something?
The Hope Chest is a weekly online diary characterized by descendants of five of the founders of The Danish Home. Come along with Ella, Ingrid, Liam, Lili and Mia as they intertwine the past with the present, weaving modern-day experiences and realities into a fictional story line that is true to the heart of the 12 determined women who envisioned, and realized, The Danish Home of Chicago 128 years ago.
Congratulations to The Hope Chest on winning a 2017 and 2018 Merit Award for excellence in digital publication from the National Mature Media Awards!
Categories
Archives