Much as my family enjoys celebrating its Danish roots, there’s one day of the year when everyone’s a little bit Irish – St. Patrick’s Day. When the girls were younger, Brad and I would take them into Chicago to see the dyeing of the river. It was so magical for them to watch the usually greyish water below our vantage point on the Michigan Avenue bridge turn bright green. I always loved the look on Anna’s face as the miracle occurred, but Olivia was always the more practical.

“If the river becomes green on St. Patrick’s Day, why isn’t it red and green on Christmas?” she asked.

Brad would tell her it was because by Christmas, the river would be frozen, to which she would say something like, “Well, why don’t they make the ice rink at the Millennium Park pretty colors?” It’s no wonder she’s studying art and design now that she’s in college.

I do think St. Patrick’s Day is a fun holiday, whether you are Irish or not. In fact, WalletHub just rated Chicago number one among five American cities in the celebration of St. Patrick’s Day, beating out Boston, Philadelphia, Buffalo, NY, and New York City. To beat Boston in anything Irish is really saying something! 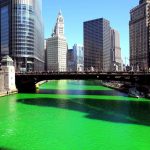 The dyeing of the Chicago River is just one of many events that make Chicago the #1 city in America for Irish fun!

But the Danes are in on the celebration, too, as Copenhagen will host its annual St. Patrick’s Day parade on the 17th, when families will dress in green and dance through the streets. Children will have their faces painted, while parents will shop for costumes, green hats and accessories. Adults will warm up with Irish coffee made with Tullamore Dew. And just like in the U.S., dancers will take to the stage to perform intricate step dances to live music from an Irish folk band.

Another Copenhagen tradition is the annual Three-Legged Charity Race, which is billed as the ultimate St. Patrick’s Day endurance test. It raises money for worthy causes while participants have fun racing with their legs tied together!

At home, I usually make corned beef and cabbage, and this year I took some soda bread to The Danish Home to share with my friend Britta. I found her reading a book in the gathering room. 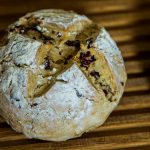 “What have you got there?” she said, peering into the paper bag.

“Homemade soda bread,” I replied. “To be honest, it’s not great. My baking skills are nowhere near as good as yours, but I thought it might go well with a cup of tea.”

“Soda bread for St Patrick’s Day!” she exclaimed. “How thoughtful, and quite a coincidence. I’m reading The Country Girls by Edna O’Brien, which is set in Ireland.”

A gentleman people at The Danish Home call Farfar (as his granddaughter Lindsay does) came over from the other side of the room to take a look. He gave the bag a quick sniff.

“Oh, my, soda bread!” he said. “I was just talking to Lindsay about that when we FaceTimed the other day,” he said, proudly waving an iPad. “Our old neighbors were Irish, and Patty used to make me a batch every year.”

I’m not sure what astounded me more: the soda bread coincidence or the fact that here was a 93-year-old man using an iPad!

“I don’t know about that,” said Farfar, pinching a tiny piece off the corner. “Seems you might just have the luck of the Irish when it comes to baking.”

Share this post
Subscribe to The Hope Chest
Looking for Something?
The Hope Chest is a weekly online diary characterized by descendants of five of the founders of The Danish Home. Come along with Ella, Ingrid, Liam, Lili and Mia as they intertwine the past with the present, weaving modern-day experiences and realities into a fictional story line that is true to the heart of the 12 determined women who envisioned, and realized, The Danish Home of Chicago 128 years ago.
Congratulations to The Hope Chest on winning a 2017 and 2018 Merit Award for excellence in digital publication from the National Mature Media Awards!
Categories
Archives