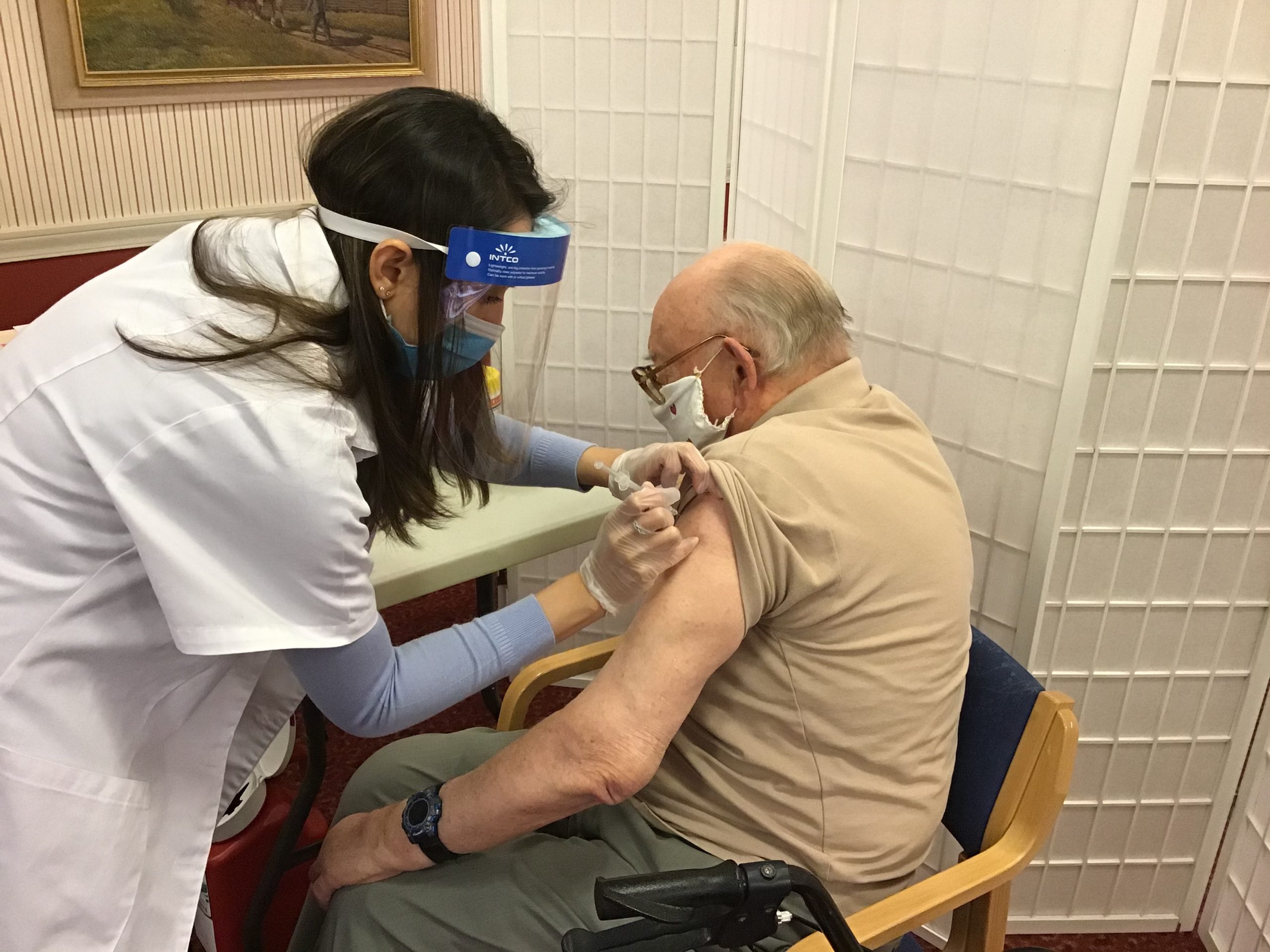 Eivind Torske, who had polio as a child, was the first resident to receive the COVID-19 vaccine at The Danish Home.

Eivind Torske walks with the limp he’s had since childhood, when he was stricken with polio as a young boy.

It is only fitting, then, that the 88-year-old Norwegian-born resident of The Danish Home of Chicago was first to receive the COVID-19 vaccine when it came to the boutique senior living community in January.

A self-proclaimed “troublemaker,” Eivind (pronounced “Ivan”) quipped, “The Danes here were too scared to be first; they had to get a Norwegian to do it!” But The Danish Home president and CEO Scott Swanson had something else in mind electing Eivind to go first.

Despite his natural sense of humor, Eivind had his share of childhood troubles. In 1940, when he was ten years old and Norway’s King Haakon VII refused to abdicate his reign to an unpopular Nazi collaborator, the Germans responded by bombing Norway. Eivind’s fishing town of Kristiansund N., Norway, was decimated, almost every house burned.

The other children in his village with polio were given permission by the Nazi’s to go to Sweden for treatment of the disease for which there would be no vaccine until the mid-1950s. Eivind, however, remained in Norway with his family. His sister and brother did not contract the virus.

“My father didn’t like the Germans, so they didn’t send me,” said Eivind in his thick Norwegian accent. Treatment for his affected arm and right leg consisted of exercising three times a week in water warmed in the basement of his family’s rented apartment.

“Polio is a virus that eats muscle; you get it from something you’ve ingested,” explained the man who, 78 years later, still displays effects of the disease. A retired cabinet maker employed with Parenti & Raffaelli, Ltd. and serving such megawatt clients as Oprah Winfrey and Michael Jordan, Eivind came to the U.S. in 1961 with a purpose in mind.

“I wanted to prove to myself that I could still do things, even with my handicap,” he said. A resident of Chicago’s Portage Park for 52 years, Eivind married and became involved with local Scandinavian organizations, including The Danish Home, Bjornson Male Chorus, Harmonien Singing Society, and Chicago Torske Klub (which shares his name, Norwegian for “codfish”).

“I’ve known The Danish Home for 40 years. I came to Summerfest, Fall Fest…I always knew I’d be here when the time came.” That time came in June of 2019.

“I’m glad I was here before the COVID pandemic; there’s plenty to do here, plenty of trouble for me to make,” he jokes. Never having received the polio vaccine, Eivind was only too willing to be first in line for COVID inoculation at The Danish Home.

According to The Danish Home director of nursing, Cecilia Ramos, all residents have willingly received the first dose of the vaccine and have experienced no notable side effects. Second doses will be administered in February and March.

“I’m no doctor, and I don’t play one on T.V.,” said Eivind, “but it only makes common sense to get the vaccine.”