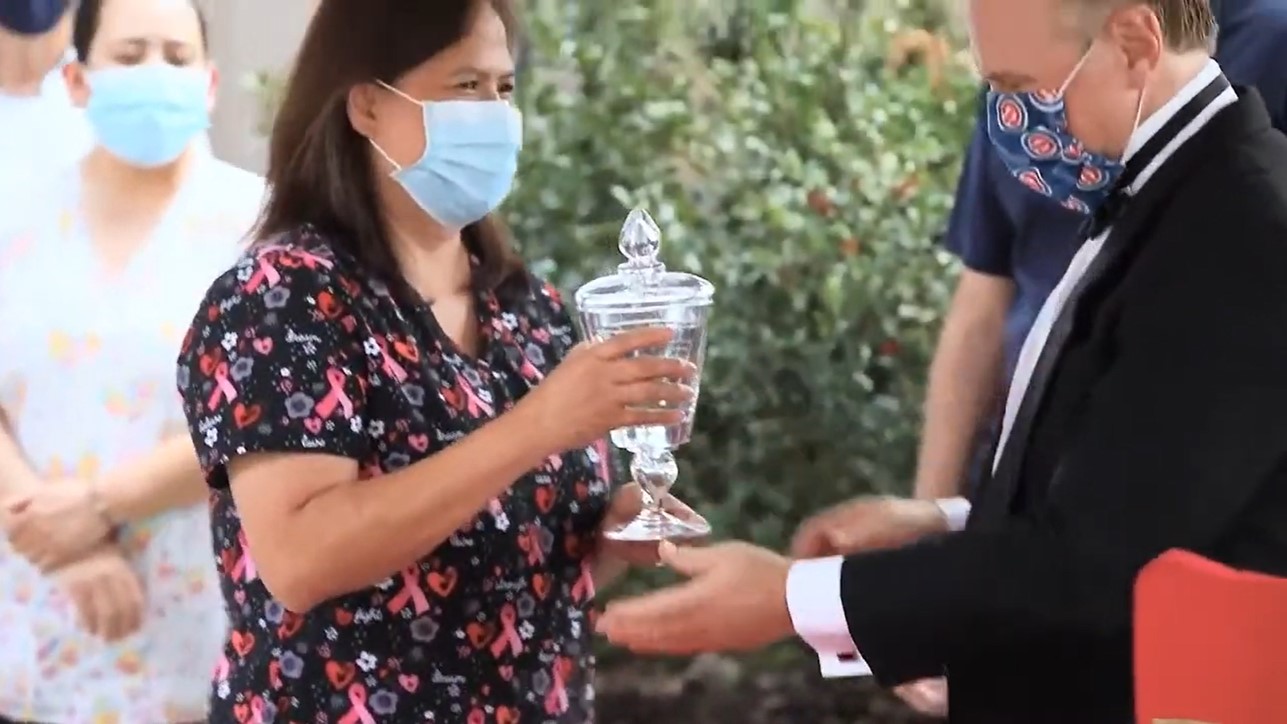 A registered nurse at The Danish Home for the past 22 years, Imee Miller accepts the 2020 Essence Award from president and CEO Scott Swanson on behalf of the entire Danish Home staff.

For many, the prospect of holding an event “online only” that traditionally occurs in swanky digs with fine food, cocktails and first-class entertainment would be daunting. But the Danish Home Foundation’s annual fundraiser on September 19 wasn’t the boutique senior community’s first virtual rodeo, so to speak.

In May, the 129-year-old community nestled in the historic district of Norwood Park produced a live, virtual concert featuring Grammy Award-winning violinist Mads Tolling with one purpose in mind: to bring together residents, family and friends of The Danish Home during a time when the novel coronavirus kept them physically apart.

While the success of the May event may have given The Danish Home impetus to orchestrate a second remote production this year (albeit its first-ever virtual benefit), president and CEO Scott Swanson contends that it was motivated by something much deeper.

“This year’s benefit was inspired by a serendipitous convergence of long-time friends and family bonding together in a common desire to support our community during unprecedented circumstances,” he said.

Appropriately, the event was titled “Celebrating the Power of Our Community: Valuing Friendship and Family.” Faithful sponsors of the fundraiser gladly forewent the in-person gala this year and donated what would have been the ticket price – and much more – in monetary gifts toward special projects and silent auction prizes and bids.

Originally planned by residence counselor Debi Lathom to occur at the Oak Park Country Club on September 19, the onsite event was canceled during the summer when it became clear that large gatherings would not likely be safe or permitted by fall.

Undeterred, associates of The Danish Home (led by The Danish Home Foundation’s development manager, Linda Steffensen) brainstormed ways to present an engaging online affair that would include entertainment, special guests of the Danish-American community, and an online silent auction.

“Through our strong connections with visitors to The Danish Home and our many talented friends, we were able to delight the larger Danish Home audience online,” said Linda, who zealously went about contacting groups and individuals who’d performed in the past at The Danish Home. The Danish Home also serves as an unofficial cultural center for Danish-Americans in the Chicagoland area.

Interspersed throughout the performances were photos of residents and live messages from Scott Swanson, Foundation board chair Jeff Anderson and Danish Consul General of Chicago Jakob Skaarup Nielsen. Newest board member Bruce Bro sent a special pre-recorded video greeting from high in the Rocky Mountains during his 500-mile trek along the Colorado Trail. The so-called “Hiking Viking” raised nearly $30,000 in support of Danish-American organizations throughout the U.S.

“A big key to the virtual production was making sure each recorded segment was less than 100MB and less than five minutes,” noted Linda. Also included in the many moving parts were live viewer commentary, sponsor recognition and text donation opportunities.

A highlight of the benefit was the presentation of the annual Essence Award for exceptional service, this year bestowed upon the entire Danish Home staff. Professionally recorded on a 97-degree day in August in the home’s lovely garden, the ceremony included speeches from Scott, The Danish Home Foundation’s capital campaign chair Kristie Hansen-Mendez, Women’s Auxiliary president Ellen Stolfa, and a prayer from Rev. Dr. Karen Knutson.

“Scott was in a tuxedo, we had only an hour to film, and everyone had to follow strict COVID guidelines with masks and social distancing,” said Linda. Despite the heat and restrictions, however, the afternoon came off without a hitch, and the assembly of staff and friends looked genuinely pleased and proud to be there.

Imee Miller, a registered nurse at The Danish Home for the past 22 years, graciously accepted the award on behalf of her fellow staff members.

“We are as blessed to be part of The Danish Home family as our residents and their loved ones,” Imee said. “We can’t imagine being anywhere else.” Each employee’s photo was taken by The Danish Home CFO Fred Saviano and featured in the award segment.

Remarked Linda, “It was hot, but we were grateful it wasn’t raining.”

Indeed, the ties among this close-knit community could not have been clearer.