It’s like a Nicholas Sparks love story, and a Hallmark movie all rolled into one, with the added bonus that it’s all true.

Maddie Hopkins, a resident of Wicker Park, went antiquing earlier this spring and wandered into Lost Eras, an antique shop in Andersonville. There, she spotted what she described as a “cute old Valentine card” perched on a bin. “There was an adorable note written from a woman named Teddie to a man named Bill.  It said that he was the love of her life.  I thought this was the cutest thing I’d ever seen,” Hopkins said, deciding to purchase the card. “It needed to be somewhere that it could be cherished.” Hopkins then discovered that the bin on which it was standing was a sort of treasure trove, filled with love letters between Teddie and Bill. They were all from a four or five year period between the late 50s and early 60s and many seemed to be written while Teddie was here locally, and Bill was living in Greece. Some of the letters were written by Bill in Greek. “They talked about their love and how they couldn’t imagine their lives without each other. There were 250 letters. They just loved each other so much,” Hopkins said.  Among the letters was a card with a photo of a church in Waukegan on which Teddie had written, “This is the church in which we’ll someday get married.”

Hopkins decided she ‘needed’ to purchase the entire bin. “I could not think about these letters sitting in a box in an antique store, gathering dust. This was a couple’s history and love story,” she said. The woman at the register told Hopkins that the letters had been found by construction workers in a duct-taped box in the wall of a home they were renovating.. The box was placed in a pile of items for donations.

“These letters were saved and protected for a reason. They were precious,” Hopkins said.  Researching the first and last names written on the envelopes, and assisted by the wonders of modern technology and Hopkins’ sleuthing skills, she was able to learn a little about the couple. “I went down a rabbit hole, finding out what I could about their lives and family. I learned that they’d gotten married in the 1960s; I believe in the church in the picture. That made me so happy. They had two children and remained very much in love.”

Tragically, Hopkins said, much of what she learned was from the obituary about the untimely death of their daughter at the age of 34. “Through that, I found one of the family’s neighbors on Facebook and called her. I told her I couldn’t find any family to give the letters to. She started sobbing on the phone. The daughter had been her best friend, and Teddie and Bill were like second parents to her. She told me that Bill had died of a broken heart shortly after the death of their daughter. Teddie started to decline cognitively and moved to The Danish Home in Norwood Park. I got in touch with Debi Lathom there and told her about the letters, and she started crying. I took the box of cards over for her to give to Teddie.”

Hopkins reported, “Debi emailed me shortly afterward, that she’d given the letters to Teddie who read one of them. She was so happy and said it made her day.”  Hopkins actually had the opportunity shortly thereafter, to meet and visit with Teddie as she poured over her cards and letters.

“I absolutely love that this happened the way it did,” said Lathom. “Each and every one of our residents has a fascinating history and stories to share. We treasure them all. This also shows the goodness of Hopkins’ heart for preserving these precious letters and returning them to the rightful owner. We’re so grateful for her generosity.” 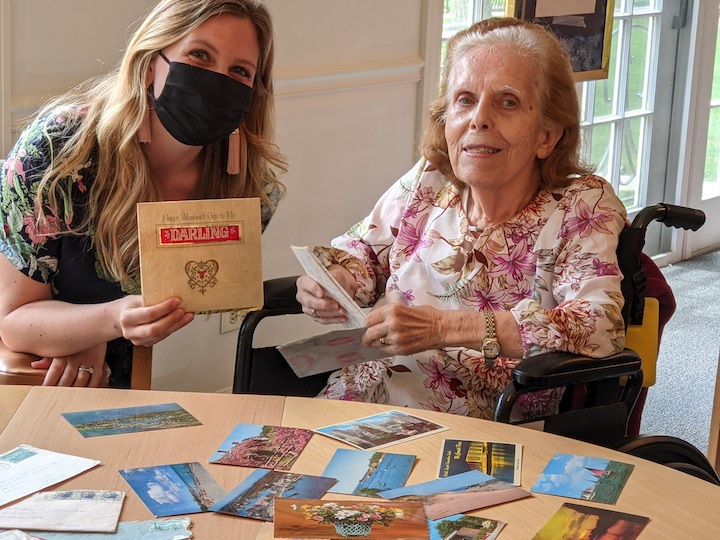