Longtime Nursing Staff Is Family to Residents of The Danish Home 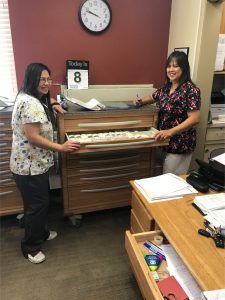 Grace Camoras (left) and Imee Miller are longtime nurses at The Danish Home, where they feel like “family.”

“I have spent almost half of my life at The Danish Home,” said Imee Miller, who has been a staff nurse at the boutique senior community in Norwood Park since 1998. Her cohort, fellow registered nurse Grace Camoras, has been employed at The Danish Home for the past 12 years.

Staff longevity is tenuous in senior housing, and both Imee and Grace are acutely aware of how rare their lengthy tenure is. They are also very clear about why they’ve stayed so long.

“Everyone is so welcoming here, always helping and supporting one another, and the residents treat me like family, not a paid worker,” said Grace, whose childhood dream to be a doctor morphed into a desire to be a nurse working with elderly people. “I grew up with my grandparents in the Philippines, so I really like seniors. Residents here treat me like I’m their own granddaughter.” Imee agreed: “The Danish Home is my second home.”

Residents, too, feel like family in the company of Grace, Imee and the 22 other members of The Danish Home’s healthcare staff.

“For-profit senior communities are often understaffed; there’s no time to form relationships with residents,” said Leif Nielsen, current resident of The Danish Home and its former administrator. “But here in our small, not-for-profit environment, those in healthcare have time talk to us, to listen to us. We have formed long-lasting friendships with them.” It was, in fact, Leif who encouraged Grace to pursue nursing. “I thought she had the right qualities,” he said of the woman who began her career at The Danish Home in its dietary department.

Since its beginnings in 1891, The Danish Home has been dedicated to creating a culture of personal attention, care and familial bonds among residents and nursing staff. Improvements have been made continuously throughout the years, including 24-hour assistance, licensure for skilled care and education for professional development.

Of current president and CEO Scott Swanson and other administrators at The Danish Home, Imee said, “Management is so supportive of us. That kind of encouragement makes us feel valued, like we’re more than just an employee.” Imee also grew up in the Philippines and has worked with seniors her entire career.

“At first, my purpose in pursuing nursing was to come to America, but I’ve found that this is my true calling after all.” Imee’s voice brightens when she speaks of the friendships she’s made with residents and their families as well as fellow employees, some of whom are her and Grace’s real family members.

“I have residents now whose parents I cared for. Mr. (Leif) Nielsen used to be my boss!” Imee speaks appreciatively of residents’ children who approach her at The Danish Home’s various events. “They tell me they still remember how I took care of their parents and tease me that when they come to live at The Danish Home, they hope I’ll care for them, too.”

Grace and Imee acknowledge the importance of staff longevity to residents, especially for those who are dealing with memory issues. “When there’s continuity in the care of residents, we really know their progress and can tell right away if there are any changes in their status,” said Grace. Added Imee, “People know us; they trust us. And if they’re transitioning from one level of care to the next, it’s reassuring to them and their families that we are familiar.”

According to Grace, whose great-aunt is a resident of The Danish Home, it’s important for the healthcare staff to know people over a long period of time, what their stories and memories are, what gave them joy before, and what will still reach them in a positive way.

“In this small community, we know all the residents and we think of them as our own family.”