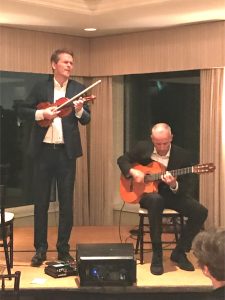 Touted as “An Evening of Music and Celebration,” The Danish Home Foundation’s annual benefit on September 21 at the Oak Park Country Club did not disappoint.

The event in support of The Danish Home, a boutique senior community and Danish-American cultural center in historic Norwood Park, featured Grammy Award-winning entertainment, live and silent auction packages, and an obvious dose of love for the community that has provided a safe haven of care for older adults since its founding in 1891.

During the cocktail hour in the handsome country club lobby, two and three generations of residents, staff and longtime friends and supporters of The Danish Home shared smiles, laughs and Danish accent-tinged conversation with one another. Leif Nielsen, former 25-year administrator of The Danish Home, and his wife, Diana, were among them.

Guests of honor were Consul General of Denmark in Chicago Jakob Skaarup Nielsen, a year into his post, and Vice Consul Lisbeth Christensen, who has served the Consulate since 1984. On behalf of the Consulate, the two dignitaries graciously accepted The Danish Home’s Essence Award recognizing exceptional support of The Danish Home. The Consulate’s historic partnership with The Danish Home of Chicago dates back to the home’s founding 128 years ago.

In a short film highlighting the relationship between The Danish Home and the Consulate, Nielsen quipped with a wink: “It’s about time the Consulate won the Essence Award.”

Procured by Linda Steffensen, The Danish Home Foundation’s development manager and previous Essence Award recipient, auction prizes augmented the efforts of The Danish Home to garner $10.5 million in support of its capital campaign for building expansion and increased charitable care. Nike Whitcomb, a major sponsor of the event, is spearheading the campaign along with campaign chairperson Kristie-Hansen Mendez, also a major event sponsor.

Following dinner and the bestowing of the 2019 Essence Award by Swanson, award-winning Danish musicians Mads Tolling and Jacob Fischer took the stage to entertain guests with “Chicago Jazz, Danish Style!”

Violinist Tolling has won two Grammys, while Fischer is a prized jazz guitarist in his own right. The two, who have collaborated musically in the past, delighted their audience with unique and jazzy renditions of beloved music from various genres.

“This year’s annual benefit is a testament to the steadfast commitment to The Danish Home demonstrated by so many of our friends, family and residents. We were grateful and thrilled to honor the Consulate this year for its long history of support,” said Swanson.

“It was a wonderful evening that we were happy to share with those who have served The Danish Home for years as well as our new friends. Thank you to our sponsors and donors for your faithful dedication to our community that is a home in the very best sense.”