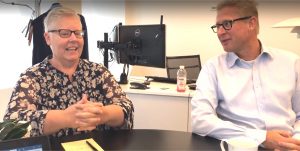 Consul General of Denmark Jakob Skaarup Nielsen and Vice Consul Lisbeth Christensen will be The Danish Home’s special guests at our Annual Benefit on September 21.

“You could say we go hand in hand,” said Consul General Jakob Skaarup Nielsen about the Consulate General of Denmark in Chicago’s longtime relationship with The Danish Home. This year, the Consulate will receive The Danish Home Foundation’s Essence Award for exceptional support of the boutique senior community at its annual benefit on September 21.

While Nielsen’s post in Chicago began just a year ago, he has already immersed himself in the many activities and initiatives of The Danish Home that have been the bailiwick of Vice Consul Lisbeth Christensen since 1984.

“I’m standing on the shoulders of Lisbeth’s 35-year-old history with The Danish Home, and we are honored to accept the Essence Award on the Consulate’s behalf,” said Nielsen. “It’s about time,” he added with a wink.

Indeed, the roots connecting The Danish Home and the Consulate go as far back as the home’s founding in 1891. Mrs. C.H. Hanson, one of 12 pioneering women who envisioned a safe haven of care for older adults, was married to the Consul serving in the early 20th century. Christensen also acknowledges her predecessor, Hugo Petersen, as a champion of the home. “He took great interest in The Danish Home,” she said.

For her part, Christensen has participated in myriad events at The Danish Home and facilitated visits from various Danish dignitaries, including the Crown Prince and Princess. Citing the recent tour of the Danish Royal Ballet’s youth company in Chicago and at The Danish Home, Christensen said, “It’s important to us that residents have an opportunity to meet Danish groups and officials.” In 1972, the Consulate arranged a visit to The Danish Home from Her Majesty Queen Margrethe II herself.

Well before Christensen’s three and a half decades of involvement with The Danish Home, the home’s position as a cultural center for Danish-American relations has been celebrated and encouraged by the Consulate.

“It’s important to have an institution that reaches back in time but is also here for today,” said Nielsen. “The Danish Home still upholds the same basic Danish values and traditions, especially where care of the elderly is concerned.”

But he is quick to emphasize the significance of progress: “If you stay in the past, things stall. You have to develop and change.”

Recognizing The Danish Home Foundation’s $10.5 million dollar capital campaign in support of building improvements and increased charitable care, Nielsen remarked that The Danish Home is doing a great job preparing for the future. “Thank God for that.”

When asked if Danes are truly the world’s happiest people, Nielsen remarked that Norway is currently ahead of Denmark on the happiness scale. “I think they’re drinking too much of our aquavit,” he quipped.

Perhaps, but one thing’s for certain: The Danish Home is ecstatic about its continued vital relationship with the Consulate General of Denmark in Chicago.