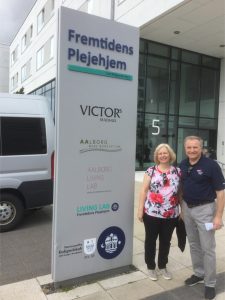 The Danish Home president and CEO Scott Swanson and his wife Amy visited “The Nursing Home of the Future” on their trip to Aalborg, Denmark.

As president and CEO of The Danish Home of Chicago, Scott Swanson is enmeshed in Danish culture every day of his life. But this year, for the first time, he visited the country from which so many of his beloved residents and friends hail.

Along with his wife Amy and The Danish Home Foundation’s development manager Linda Steffensen, Scott visited Aalborg and Skagen in northern Denmark, primarily to attend Rebildfest and associated events from June 30 through July 7.

Established in 1912, Rebildfest celebrates the strong bond between America and Denmark, with a focal point on American Independence Day. At The Danish Home, ties to the Rebild organization are even stronger.

Max Henius, the Danish-American Chicagoan who established Rebildfest, was an early board member of The Danish Home. Generations of friends and residents of the home have traveled to Aalborg, Henius’ birthplace, to attend Rebildfest over the years.

Currently, Linda is the U.S. corporate secretary of Rebild National Park Society, Inc., which honors the preservation of Danish culture in America and sponsors various programs and events, including the grand 4th of July celebration.

Along with the Swansons and Linda, some 30 other Chicagoans and friends of The Danish Home attended Rebildfest this year. In total, about 100 people from across the U.S. made the trek to northern Denmark.

For second generation Danes like Linda, whose extended family is in Denmark, it’s a “homecoming” she wouldn’t miss. Representing her 25th trip to Denmark, this year’s visit was especially memorable because she was able to share it with the Swansons. “I’m so grateful Scott and Amy got to go to Denmark,” she said.

For Scott, the trip was a bit like coming home as well. “The friendships are so strong within the Rebild community. We felt like we were amongst our people,” he said. “The trip really confirmed the concept of hygge, too – the comfort and contentment and gathering of friends. No one sat in one place for very long,” added the man who is no stranger to making his way around a room to socialize.

Scott also remarked that attending Rebildfest and surrounding events (such as a garden party at Aalborg Defense and Garrison Museum and picnic in Rebild Hills, a big tent luncheon with music and singing, a welcome reception from the mayor of Aalborg, and a prime view of the Tall Ships Races from a Norwegian ship) was like completing the Rebild loop. “I’ve been on the American side, but now I see why the partnership is so important to the overall organization.”

That vital partnership was also punctuated by various anecdotes from the trip. Coincidentally, the jazz band on the Norwegian boat was from Sct. Mariae Skole, a school in Aalborg. These were the very same students who entertained residents and staff at The Danish Home last year. Other such connections, like Linda’s encounter with Rebildfest music headliner Tamra Rosanes (who wants to visit The Danish Home), were made throughout the journey.

At the front end of the trip was a tour of Fremtidens Plejehjem, “The Nursing Home of the Future.” There, Scott, Amy and Linda visited with staff at this brand-new community and compared notes about how best to care for residents in senior living.

Rounding out the weeklong sojourn was a visit to Skagen, the top of Denmark, where breathtaking views of the countryside and beaches aglow with glimmering light delighted the travelers.

“It was closure,” said Scott of the voyage that brought the Danish-American connections full circle.