New Danish Home Resident Is One of Chicago’s Finest 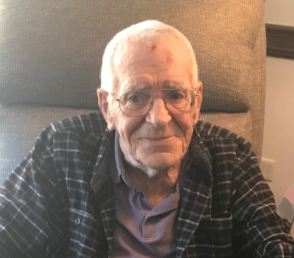 en moved into The Danish Home from his home in Door County, Wisconsin, just two months ago. But the former Chicago firefighter was a mere boy the first time he came to the boutique senior community. “I used to go to the summer picnics with my grandparents. I’ve known this place for over 70 years,” said Earl, who grew up near The Danish Home and whose father’s parents were born in Denmark. “My grandparents were very involved in Chicago’s Danish-American organizations, including The Danish Home.”

When the time came for Earl to move from his second home in Egg Harbor, WI, The Danish Home seemed the ideal choice. His five children, three of whom live within 10 minutes of him and visit almost daily, felt the same. “I cannot say enough about the people here,” said Earl. “They are all fantastic; there is not one exception.”

He says the same of his co-workers over 32 years with the Chicago Fire Department, in which he climbed the ladder from lieutenant to captain, assistant to the fire commissioner, deputy in charge of Emergency Medical Services overseeing some 60 ambulances and 800 paramedics, and, finally, head of air-sea rescue at Meigs Field on Lake Michigan. “I was learning to fly a helicopter,” said Earl, who retired in 1995.

Helicopters are not the only planes Earl has flown. When he wasn’t saving lives, he spent his time piloting his own Cessna 172, among other aircraft. “When the kids went to college, that was the end of my toys!” he said.

When asked about any outstanding moments or memories throughout his career, the man whose uncle was a firefighter and whose son recently retired from a career in paramedics is hard-pressed to pick just one.

“It was very rewarding at times and always challenging. I’ve seen it all,” said Earl, whose work brought him face-to-face with notorious plane and train wrecks, the riots at Chicago’s Democratic Convention in 1968 and after Martin Luther King, Jr.’s assassination, and countless other emergencies. “Today, there is counseling for people who respond to dire situations, but back then, we just had to get back to work.”

Through it all, however, Earl had his trusted colleagues. “I worked for and with some of the finest people ever.”

Interviewed on September 11, Earl commented on the news commemorating the 17th anniversary of the terrorist attacks. The day it happened, Earl recalled, his daughter (a senior dispatcher at O’Hare Airport) told him the news. “I remember watching those firefighters go into those buildings, knowing what they were in for. I couldn’t believe it. How many times did I respond to fires at the Hancock building?” he reminisces.

When told he is a hero to be thanked for his service, the grandfather of 17 demurs. “We did all we could, but we won some and lost some. But we were always a team.”

As for the team at The Danish Home, said Earl, “I couldn’t ask for anything more.”