Dining at The Danish Home Adds Big Dash of Love 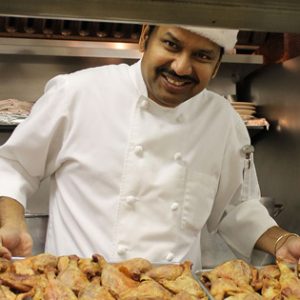 In a ballroom of over 300 hundred people, Roger Sukhu received a standing ovation for the multi-course meal he and his team prepared for guests of “Lillejuleaften,” The Danish Home of Chicago’s 125th anniversary Christmas celebration in 2017.

“That’s when I really understood how much people appreciate what I do,” said The Danish Home’s dining services director, who’s been creating delicious, nutritious meals for residents and friends for the past 20 years. When asked about his longevity at the boutique senior living community, he said, “This is my home away from home. I love the atmosphere at The Danish Home, and I really enjoy what I do. Our whole team is so dedicated to our work.”

Understanding that good food is more than mere sustenance, Roger and his team prepare each course not only with attention to proper nutrition, fresh ingredients, dietary restrictions, and personal preferences, but with a generous dash of devotion, too. “I love taking care of these residents,” said the native of Guyana, who has been working in the culinary arts for nearly four decades.

Beginning with helping his mother in the kitchen of his childhood home, Roger took an interest in cooking early on. When he joined his uncle in the U.S. after high school, he took a job in a restaurant as a dishwasher. However, his culinary flair was quickly noticed, and he went directly to cooking. “I didn’t wash a single dish,” said Roger.

While Roger had never cooked Danish food until he joined The Danish Home in 1999 under the tutelage of Danish chef Ken Christensen, he has since learned the various nuances of Scandinavian fare, largely with the help of residents themselves. In fact, residents have significant influence over what he prepares and how, said Roger, who knows their personal likes and dislikes and accommodates whatever their hearts (and palates) desire.

“I joke with residents that I get paid by the pound,” said Roger, who’s been told numerous times that his creations of all types and styles are too good. The familial camaraderie that Roger and assistants George Bautista and José Correa, along with servers and dishwashers, have with the intimate group of residents is intentional.

“We make a point of talking to people and asking them how their food is and if there’s anything we can do to make it better,” said Roger. “We love what we do, and the residents are always so thankful and appreciative.”

While one may not expect a chef of East Indian descent to consider smørrebrød his specialty, Roger does. “It’s time-consuming,” he admits of the Danish open-faced sandwiches, “but they’re so beautiful with all the different toppings, and everyone admires them so much.” He also enjoys preparing pumpernickel, roast duck, and frikadeller, remarking that he’s made as many as 2,000 of the Danish meatballs at a time.

“I take real pride in what I do, and though it’s hard work sometimes, what I get in return makes me want to do it all over again.”