True To Its Name, The Danish Home Is Very Homelike 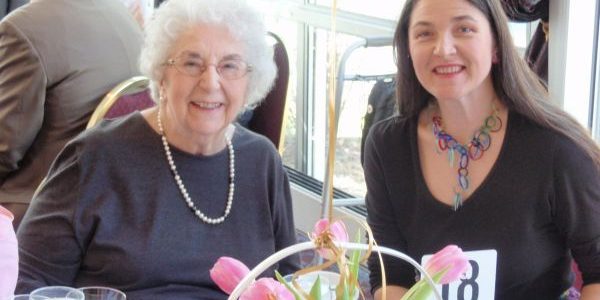 Her expectations were high, but have been impressively exceeded. When Ellen Stolfa-Rowe’s mother Evelyn Stolfa made the decision to move to The Danish Home almost ten years ago, Ellen was all for it, primarily due to the great things she’d heard about the boutique senior living community. “I knew she’d be going into a great place, but it’s even better than I thought it would be,” said Stolfa-Rowe.

Stolfa had been living in Florida for approximately ten years after the death of her husband. Realizing, however, that she missed her friends and family in the Chicago area, she decided to move back. After living for several years in a condo in Edison Park, she moved to The Danish Home. “We live a block from The Danish Home, and we’d heard so many great things about it. My mother decided to give up the responsibilities of housekeeping, and moved in. It’s close to us, and it’s really a great place,” Stolfa-Rowe said.

Now 92 years old, Stolfa receives “enhanced care,” said Stolfa-Rowe. “She’s in assisted living, and loves it. She’s been very happy there and we’re thrilled. It’s a blessing to have her there.”

Stolfa-Rowe said that true to its name, The Danish Home is very homelike. “It’s small, so everybody knows everybody else. She loves the staff and practices her Spanish with some of the housekeepers. She has a good time with everybody and everyone is so kind and caring and good to the residents. And she’s made some good friends.”

Stolfa, her daughter said, is kept busy at The Danish Home. “She plays games, and does a lot of different activities. If there are things going on that she’s not interested in, she’ll go to her room and play on her computer. She’s got choices and options and has plenty to keep her busy during the day.”

Eager to share what she considers to be her very good fortune, Stolfa-Rowe said, “We’ve absolutely encouraged others to move here. Whenever my mom’s friends are looking for a retirement community, they know to look at The Danish Home. They’ve heard me over and over sing praises. Any time I hear someone looking for a place for their elderly relative, I immediately say, ‘look at The Danish Home.’”

View article in the Chicago Tribune